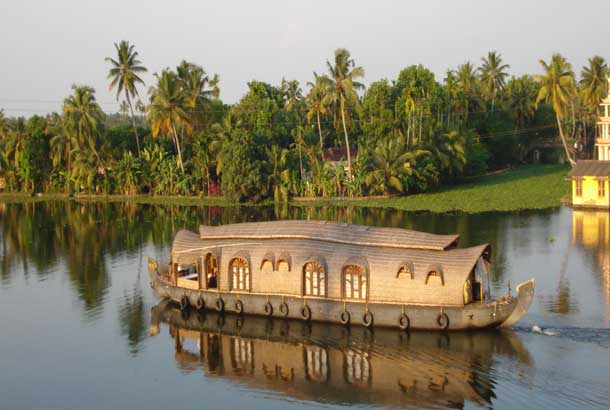 Traditionally, the houseboat was called kettuvallam and 'pathemari', which means a boat made by tying together pieces of wood. Unbelievable as it may sound, not a single nail is used in the making of a kettuvallam. Jackwood planks are joined together with coir rope and then coated with black resin made from boiled cashew nut shells. The materials that go into the making are all local and eco friendly bamboo poles, coconut fibre ropes, bamboo mats, coir carpets, etc.

These traditional country boats were giant-sized 80 feet-long crafts which were used as the only available mode of water transport in the early times from the isolated interior villages to the towns. They were referred to as rice barges.

In the olden times, The crew cooked on board, and most often, their meals included delicious pearlspot fish caught straight from the water. A portion of the House Boat had bamboo roofing, and that was where the crew would rest. Traditional lanterns were used for lights.

Developed at a time when railways were unknown and roads  were expensive to build, the traditional houseboats used to be the main mode of inland transportation with the prime purpose of ferrying paddy harvest. These boat services have been laid off with the developments taking place in the transport services in the recent past.