The entire state of Kerala is blessed by nature with plenty of rivers, lakes, ponds, lagoons, and backwater stretches. The waterways of Kerala play a main role in the economy of the state,and they link remote villages and islands with the main land. The water ways provide a cheap and economical mode of transport.

It is an incredibly different experience to cruise in the backwaters in country boats, absorbing the beauty of Kerala villages. Kerala is known for its panoramic backwater stretches, lush green paddy fields, highlands and beaches. The scenery flashes up vivid contrasts of the breath-taking green landscape and the deep blue warters. Boat rides, houseboat cruises and holiday packages are available for the tourists at nominal rates. The house boat cruises along the backwaters of Kerala have become a rage among Indians as well as international tourists.

Kerala's palm-lined backwaters are actually inland lakes linked by a network of canals. With 41 West-flowing rivers, the backwaters stretch up to about 1,500 km. The backwater routes date back over the centuries and have been long used for all transition needs, in particular trade in coconut, rubber, rice and spices. Today, these waterways connect distant villages and islands to the mainland and are nerve centers of the coastal area of Kerala.

Backwater tour/cruise in Kerala is a great way of spending your holidays in the state.The splendid sunsets, the waxing moonlights, the shoals of ducks, the pulsating palms and the wonderful waves beckon the tourist to take a dream trip down the backwater destinations in kaleidoscopic Kerala.

The major backwater stretch is in Kottayam district, where a network of rivers and canals empty into the great expanse of water called Vembanad Lake . Located at Kumarakom 16 km from Kottayam town, Vembanad Lake , an enchanting picnic spot and a fast developing backwater tourism destination, provides boating,fishing and sight seeing opportunities that are truly memorable.

Kerala backwater cruises complete the tour to southern Kerala. Kerala backwaters take you through the winding waterways of God’s Own Country, unveiling the colourful culture and customs of remote Kerala. The coastline of Kerala is dotted with these delightful backwater destinations.

The northernmost district of Kerala, Kasaragod is situated on the sea coast bordered by hilly Kodagu and Mangalore districts of Karnataka on the east and north.Fishing is a prime source of livelihood along with the coir and handloom industries.

With its unique natural and cultural attractions , Kasaragod is known as the land of Gods   forts, rivers, hills and beautiful beaches.The Bekal fort, which stands on a 35 acre headland that runs into the Arabian sea , is the largest and the best preserved fort in the State.

Situated 4 kms southeast from Kasaragod town on the Chandragiri river,this place is known for its large 17th century fort  built by Sivappa Naik of Bedanore. The Chandragiri fort, one among a chain of forts built by the same ruler, offers a breathtaking view of the river and the Arabian sea .  It is a vantage point to watch the sunset.

Boat trips to the nearby islands and palm groves are available.Boarding point : Chandragiri bridge.

Situated 30 km from Bekal fort,this is perhaps the most scenic backwater stretch in Kerala .It is fed by four rivers and dotted with numerous little islands.

Valiyaparamba is fast turning into a much favoured backwater resort that offers enchanting boat cruises.

Once the capital of the Zamorins, a prominent trade and commerce centre and the land of the Malabar Mahotsav, Kozhikode was the most important region of Malabar in the days gone by.

Unexplored and unspoiled, the backwaters of  Kozhikode hold great promises of enchanting holiday options. Elathur, the Canoli canal and Kallai river are favourite haunts for boating. Kadalundi with its beautiful bird sanctuary is a charming site. Korapuzha, the venue of Korapuzha Jalotsavam is fast becoming a popular water sport destination. 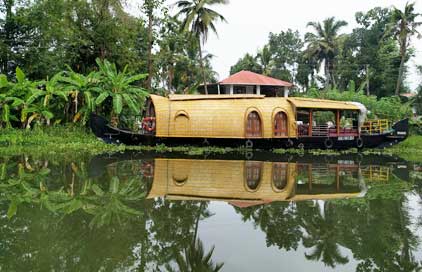 More popular as the Queen of the Arabian Sea , Kochi is a cluster of islands on the vast expanse of the Vembanad Lake.Some of these picturesque islands are Bolgatty,Vypeen , Gundu and Vallarpadam. The lake opens out into the Arabian Sea here to form one of the finest natural harbours in the world. It is this natural advantage that has made Kochi, a fascinating blend of the cultures and influences of explorers and traders who visited this wealthy land.

The Arabs, Chinese, Portugese, Dutch and the British have all left their mark here. The Jewish synagogue , the Dutch palace,the Chinese fishing net and other remnants of European and Asian architecture merge smoothly into the traditional fabric of this seaport city.

Bordered by the lofty Western Ghats on the east, the Vembanad lake and the paddy fields of Kuttanad on the west, Kottayam is a land of unique characterestics.

Panaromic backwater stretches, lush paddy fields, highlands, extensive rubber plantations and the total literacy level achieved by the people have given this district the title: the land of letters, latex and lakes. 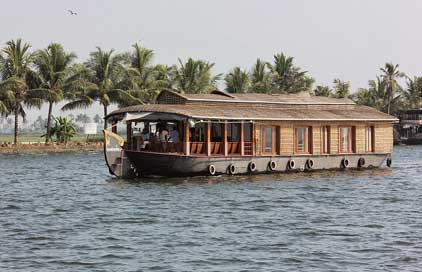 A voyage towards the north of Alappuzha, about 10 Kms from Kottayam, takes you to the rich green, sleepy little village of Kumarakom on the Vembanad lake. An enchanting picnic spot and a fast developing backwater tourism destination, Kumarakom provides boating , fishing and sight-seeing experiences that are truly exhilarating. An exclusive attraction of this much sought after backwater resort is the Kumarakom bird sanctuary.

The Kumarakom bird sanctuary is an orthithologist's paradise and a favourite haunt of migratory birds like the Siberian stork, egret, darter, heron and teal. A cruise along the Vembanad lake is the best way to view the bird life.

Located 71 Kms to the north of Thiruvananthapuram, Kollam is another coastal district of Kerala.The district which is the centre of the country's cashew trading and processing industry also has some interesting historic remnants and a number of temples built in traditional ornate architechural style.

One of the oldest ports on the Malabar coast , Kollam was once the port of international spice trade . 30% of this historic town is covered by the renowned Ashtamudi lake, making Kollam the gateway to the magnificient backwaters of Kerala .

Alumkadavu, situated 23 kms from Kollam town,is halfway on the route to Alappuzha from Kollam. The quiet little backwater village in Karunagapally town is famous for its boat building yard. It is here that the gigantic kettuvallam(traditional cargo boats of rural Kerala) were built. Today the kettuvallams, which were long replaced by mordern means of transport, have been converted into full fledged houseboats. 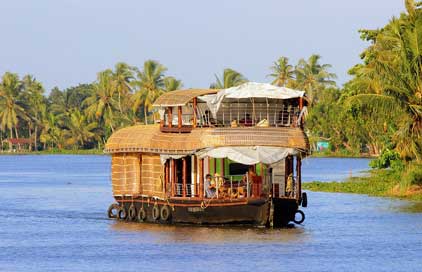 With the Arabian sea on the west and a vast network of lakes, lagoons and waterways crisscrossing it, Alappuzha is a district of immense natural beauty. Referred to as the Venice of the east by travellers from across the world, this backwater town is also home to diverse animal and bird life.

By virtue of its proximity to the sea , the town has always enjoyed a unique place in the maritime history of Kerala. Today, Alappuzha has grown in importance as a backwater tourist centre, attracting several thousands of foreign tourists each year.

Alappuzha is also famous for its boat races, houseboat holidays, beaches, marine products and coir industry. A singular characteristic of this land is the region called Kuttanad.

Kuttanad, called the rice bowl of Kerala because of her wealth of paddy crops, is at the heart of the backwaters.The scenic countryside of Kuttanad with its shimmering waterways also has a rich crop of bananas, yams and casava which accompany the rice bowl as "side dishes". This is one of the places in the world where farming is done below sea level. Inland waterways which flow above the land level is an amazing feature of this unique place.

According to mythology, a young brahmin dived into Vembanad lake to perform his evening ablutions and water is said to have made way for land to rise from below, thus creating the enchanting island of Pathiramanal (sand of midnight). This little island on the backwaters, situated 14 km from Alappuzha, is a favourite haunt of hundreds of rare migratory birds from different parts of the world. The island lies between Thaneermukkom and Kumarakom and is accessible by boat.

The southernmost district of the state, Thiruvanathapuram is bounded by the wooded highlands of the Western Ghats on the east and the north east , and the Arabian sea on the west.

A long shoreline with secluded internationally renowned beaches, historic monuments, backwater stretches and a rich cultural heritage provide this district some of the most enchanting picnic spots.