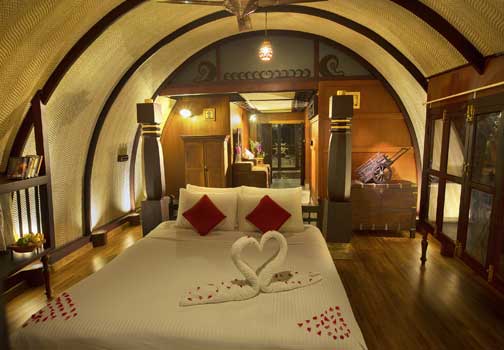 Today, the giant 80-feet long barges called kettuvallams have been adapted into luxuriously furnished houseboats. A modern kettuvallam usually has one to five bath attached rooms, an open lounge, deck, kitchenette and a crew comprising two oarsmen and a cook.Your holiday in this tranquil world, in the comfort of modern furnished houseboats,is bound to be an out-of-the-ordinary experience.

The modern House Boats have all the creature comforts of a good hotel but none of those hassles - well-furnished bedrooms, modern hygienic toilets, cosy living rooms,a beautiful kitchen and in some cases even a balcony for angling and swimming pool on upper deck. Most modern House Boats are powered by remarkably unobtrusive outboard engines; some others are poled by experienced oarsmen. Today’s houseboats or kettuvallams include air conditioned rooms,a magnificent itinerary and a chef to pamper you with the full range of deliciously hot and spicy Kerala cuisine.

The Houseboats of Kerala have become one of the most exciting tourism products in the country. Modern House Boats are huge, slow moving, exotic barges designed for sheer leisure trips. While these huge barges, measuring up to 80 - 90 ft in length, were traditionally used to carry cargo goods and were called Kettuvallams, the modern houseboats have furnished bedrooms, modern toilets, living rooms, kitchenettes and balconies. Sections of the curved roof made of wood or plaited palm leaves open out to provide shade and allow an uninterrupted view of the backwater country. Traditional lanterns are used as lights.

These houseboats are either poled by local oarsmen or powered by engines. Modern House boats have been designed to meet the Green Palm/ Gold Star Certifications by the Department of Tourism, Government of Kerala, which has recently enacted regulations, stipulating the standards of Kerala houseboats or Kettuvallams. 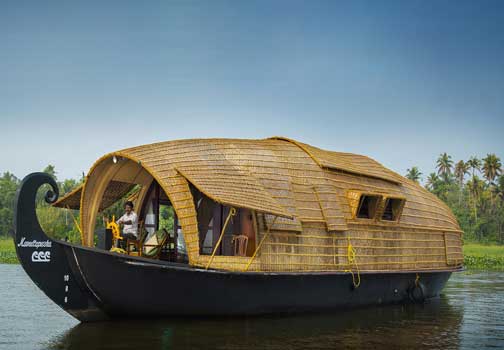 House Boats (Kettuvallams) are best described as mobile cottages with all modern facilities and offer excellent accommodation for a whole family. Houseboats are traditionally called 'Kettuvallams' which are, in reality, the converted rice barges of yester years.

Each houseboat is constructed using the ancient principles and techniques of boat building by the local carpenters using ‘Anjali` wood. Coir ropes are used for tying the wooden boards together. ("kettu" means tying and “vallam” means country boat in Malayalam, the local language - hence the local name "kettuvallam”). The materials which go into the making are all local,such as eco friendly bamboo poles, coconut fibre ropes, bamboo mats, coir carpets etc.